what this blog is about

This blog is an eclectic one, having a little bit of everything thrown in here. I hope you enjoy it!

So, I have had a number of people asking for the templates for the candy boxes and what not that I used for the Harry Potter party. Here they are! I hope anyone who wants to use them finds them easy to put together and helpful in planning a great Harry Potter marathon.

Click here to go to the template for the Chocolate Frog Boxes. Click on the "Download Image" to get the template. I had to re-size mine a little so that the chocolate frogs I had would fit in them. I found a chocolate frog mold on Amazon. The chocolates were just slightly too big for the original size of the box. 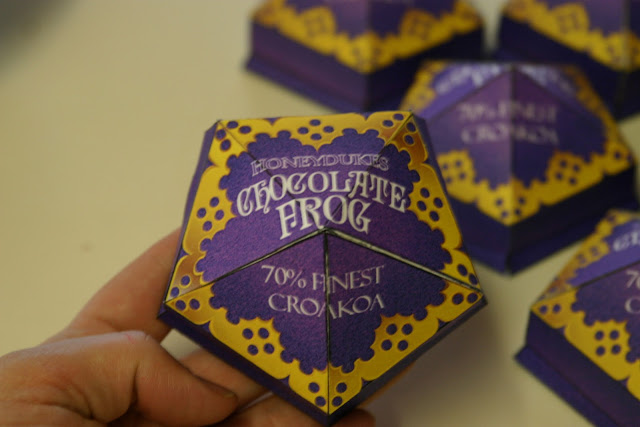 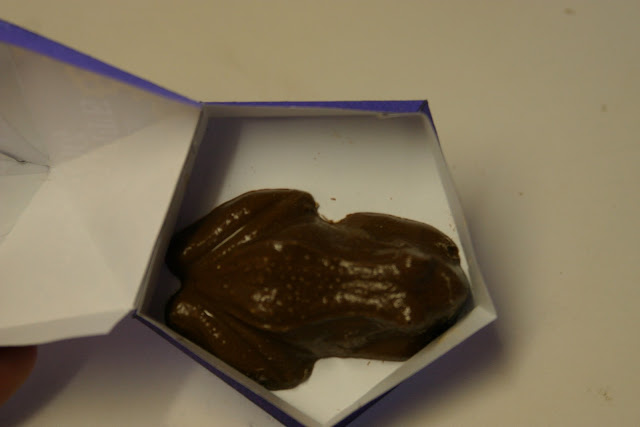 Click here to get the template for the Bertie Botts Beans Box. Again, I re-sized this once I had it downloaded to make it easier to work with. I have since found another template, click here, that I think might be easier to make. I haven't fully read the instructions on the second template, but the first doesn't really show you how to close the top. I punched holes in each section and strung red raffia through the holes and tied the ends together in a bow. For the windows, I took transparency film and cut the pieces slightly larger than the windows so I could glue it. You could use clear cellophane, but I thought the transparency film would be stronger and hold up better. WARNING: if you plan to make a lot of these boxes, they hold quite a few beans in them. We made close to thirty boxes and went through about fifteen pounds of jelly beans. The cost can be high, though the guests reaction to getting them at our party made it worth it in my mind. 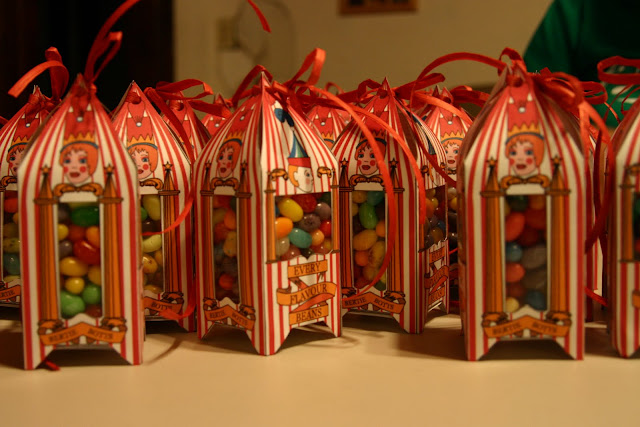 For the logbooks that I made, I wanted to cover them with Harry Potter paper. The problem I ran into was that all the HP paper I found in scrapbook stores wouldn't work well for what I wanted. The solution: I made my own paper. Click here to get the paper to use for any number of HP crafts you want to create. If you want to create your own paper, wordle.net is a great site, though it does take some getting used to. You also have to do a download in order for it to work. 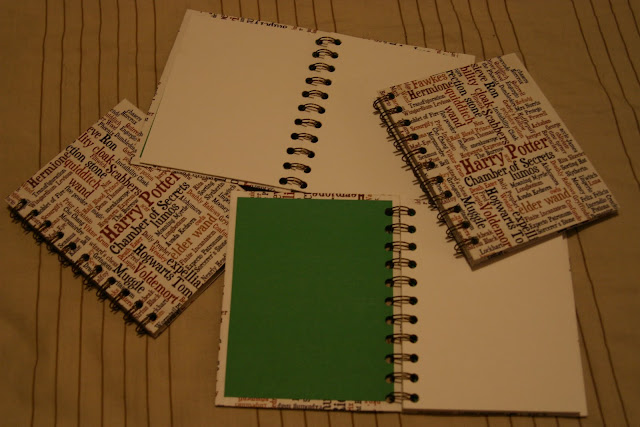 My sister made the Marauder's Maps. She followed the directions on the site with only one change. She aged the paper by spraying it with tea and baking it in the oven. She found the map by looking through the craft links on The Leaky Cauldron site. 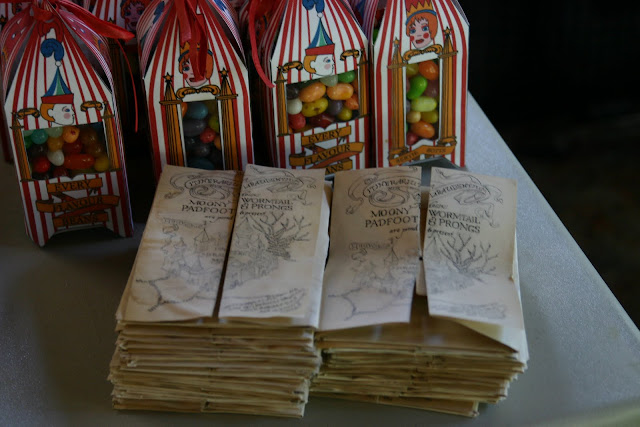 The wand making instructions can be found here. We filled our wands with sand to give them a more realistic weight. Everyone had fun making these and then dueling each other. 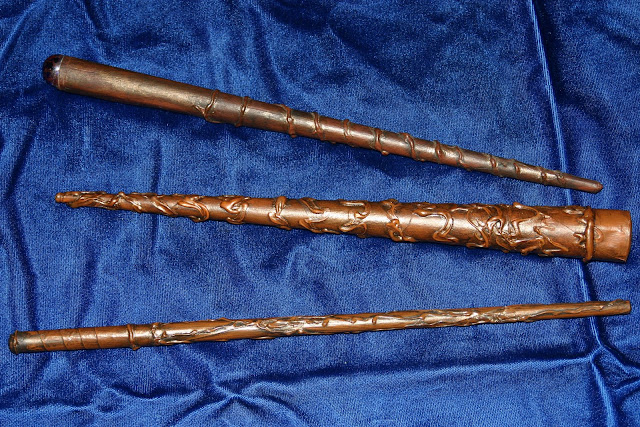 To make the acid pops, you will need sour suckers, pop rocks, and water. I had trouble finding sour suckers in my area, but finally found them at Zurchers. They also had the pop rocks there. I just love that store! Anyway, to make the acid pops, you'll need to unwrap the suckers. Fold a paper towel up and place in a small bowl with a little water. You just need enough water to soak the paper towel through. Roll the sucker around on the paper towel to get it damp. Next, roll the sucker in pop rocks until the surface is covered. You will hear the pop rocks pop and fizzle, but don't worry, there will be enough pop left in them. Wrap the suckers in wax paper. I would advise making these within twenty-four hours of serving. The longer they sit, the less the pop rocks react when eating. 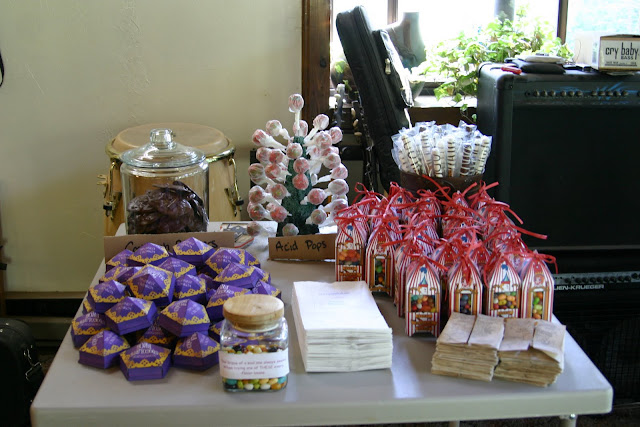 The stand was made from a styrafoam cone. I simply painted it green and stuck the sucker sticks in it to create my own sucker tree. You can purchase a lollipop stand if you would like to reuse one. Amazon has a fairly simple one for a reasonable price.

The cockroach clusters were easy to make. I simple broke up pieces of pretzels and covered them in chocolate. They did look like they might have pieces of cockroaches in them, but they tasted great! 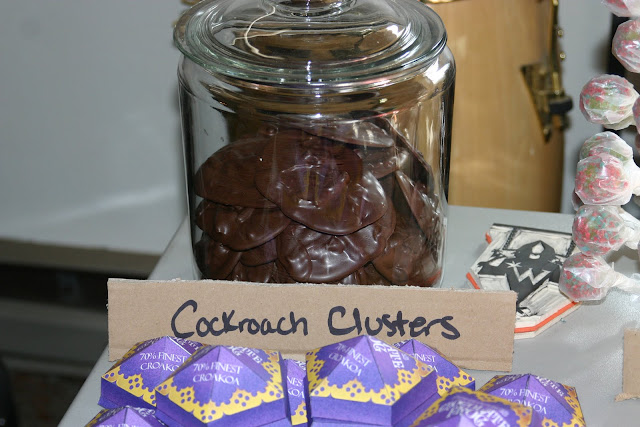 The pretzels wands were even easier to make than the cockroach clusters. I simply dipped the ends in melted chocolate and them took chocolate drizzel to create a zig-zagged look.

Amanda
Idaho City, Idaho, United States
I am an avid music lover and a major homebody. I love my family, and love to be with them whenever possible.